how we got here

Plan B and The Verdict 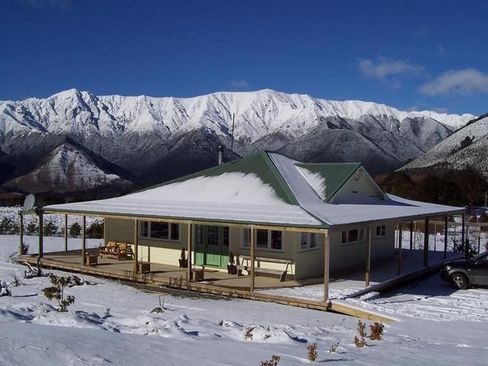 That was how it started one Sunday afternoon in Karratha, Western Australia. Both Niki and I had been searching for a property in New Zealand for some time with a view to moving back permanently and getting stuck into the permaculture way of life.

Niki had been searching mainly on the West Coast of the South Island, with a bias towards Karamea, an isolated community with its own micro-climate at the top end of the West Coast. I, meanwhile, had searches out there in the Hurunui district and had even been looking much further south in Otago. This Sunday afternoon Niki decided to change the search criteria to include Tasman district - expecting to be looking at properties in Golden Bay and surrounding areas. This was not to be. First search results brought up the photo below.

That was enough to cause the exclamation above. My response was "What?", swiftly followed by "Come and look at this" from Niki. We fell in love with the place from that first photo, who wouldn't? Two weeks later we were on a plane from Karratha to Perth to Auckland to Nelson to have a look at the place. We made it all the way to Nelson in good time; unfortunately my luggage didn't, which was not great as I was only staying for the weekend.

A short drive to Wakefield with breakfast at Chateau Rhubarbe and then we were joined by Bruce, the real estate agent. We followed him up the road to Tophouse, twisting and turning through some beautiful little valleys and tree-lined hillsides before arriving at the gate at number 385 Tophouse Road. There we were met by the owner, David.

We toured the property and knew it was the one for us. Even though it was a cloudy, drizzly day the view was spectacular and the place just felt right for us. David was kind enough to give us a thorough tour and even took us part of the way up the Beeby's Knob track to see the property from above. Passing through the native beech forest we had a strong feeling that if we did purchase this place we would only be its guardians for a short time in its existence. These trees had already been here a long time and would remain a long time after we had gone. We would be happy as long as we left the place better than we found it. We mentioned this to David.

We spent that evening at the nearby Tophouse Hotel, an historic inn dating back to the mid 1800s with an interesting past, including a murder suicide! Next morning, we went back to the property and stood outside the gate in the pouring rain. We had made our decision, we would put in a bid that day.

"Are you the owners?"

We heard a voice behind us as a flash 4x4 pulled up.

"Can it be sub-divided?" he said

"Carve it up and sell it, that's what you want to do. If only I had the cash available I'd do it myself" he continued. He sped off.

We drove down to the lakeside and there, we made the phone call to Bruce to advise him that we would like to make an offer. We were to meet him at his office in Richmond at 4:00pm to complete the paperwork.

There followed a slow drive back into Richmond, the long way via Kawatiri Junction in the rain, to Bruce's office. As soon as we sat down he said:

"I must tell you, by law, there has been another offer on the property. But, because you were shown it first, I will submit your offer to the vendor first."

Our faces dropped. This we had not expected. The ad for the property had been 'offers over', something neither of us had dealt with before.

"You need to make your best offer now, as you may not get the chance to negotiate further," said Bruce, looking serious.

He left us for a few minutes to prepare the paperwork and to let us decide on our offer. We quickly decided on a price that we thought fair and that we could afford. When Bruce came back in and we told him our offer we thought his face changed just slightly - had we not offered enough, was the other offer higher? Who knows, but we signed all the paperwork and he said he would ring when he had any news.

We drove on into Nelson where we found our hillside B&B. The weather had turned particularly nasty but we had no food, so needed to find somewhere for dinner. We found a local directory and decided upon a Spanish restaurant in the centre of Nelson called Plan B. Off we set into the dark and stormy evening and managed to get completely lost, Nelson not being the most lively of places on a Sunday evening. After several wrong turns we located the restaurant only to find that it was shut. That was it, there was no Plan B. A couple of streets away, opposite the courthouse we found a pub that was open and serving dinner. This was The Verdict. Inside, the place was bustling with people all dressed up and in the background we could hear the sombre strains of tango music.

"It's the tango club in here tonight, they're in here every Sunday," said the barman. "I can still serve you food and drink."

We took our place at one of the tables, ordered some food and drinks and told the barman the story of our day. Then we waited. We sat there thinking.

Should we have offered more? Should we ring Bruce and change our offer? What if we lose it? All these things were going through our minds and we were looking at each other worriedly. All we could do was wait (for the verdict?!). Niki's mobile phone rang. She answered and it was Bruce. She had to go outside to hear him. She came back inside again, having finished the call.

Bruce said he had presented our offer to the vendors and although nothing was yet in writing, he had their approval to tell us we had been successful. There had apparently been two other offers that day and to this day we believe that ours may not have been the highest. We would like to think that the impression we gave to David of our intentions for the place had swayed the decision in our favour.

Who knows, but certainly once we received the verdict, we had no need of Plan B.

(By the way, my luggage arrived at Nelson airport just as I was about the fly out the next morning.)

To see exactly what we were getting, check out the site details.
Viva Muntanui! Sustainable living . . . with merriment.